REFLECTIONS UPON A GARDEN VISIT – written for the SGD student writing competition 2010.

Shropshire is glorious country. Far enough off the beaten track to be truly unspoiled but filled with and close to, so many enticing garden greats that an offer of the use of a small, well appointed manor house in exchange for a week of chicken sitting and a little ‘light weeding’ made it too good to resist. Encouraged by my Shawbury based hosts to include a visit to the, as yet unknown to me, Dorothy Clive gardens near Market Drayton it was planned in as a quick stop en route to the recently rave reviewed gardens at Wollerton Old Hall, a mere hop and a skip down the A53.

Climbing the slight hill towards the wide entry way I began to wonder if I was stepping back in time to a Victorian pleasure garden and the verdant shrubberies and dated signage lining the entry did not bode well. Though first impressions are said to be important in this case they could not have been less so. Entering the gardens at the base of the steep south facing incline a pool stretches before me heavily planted with water lilies and marginals and lush with late summer foliage. Directly behind the pool a staggered gravel path winds steeply upwards between deep plantings of mature mound forming shrubs, evergreens, dwarf conifers, junipers and delicate alpines. The spreading mounds of Choiysia and Geranium interspersed with arching Dierama pulcharis contrast with the strong vertical flowers and foliage of the mature Yucca gloriosa. Trees to either side reinforce the enclosed valley feeling in this part of the garden giving it a sense of mountainous alpine garden. Turning to survey the view from the top I am struck by how beautifully it sits within it rural Shropshire setting, borrowing well the landscapes beyond it’s own boundaries. 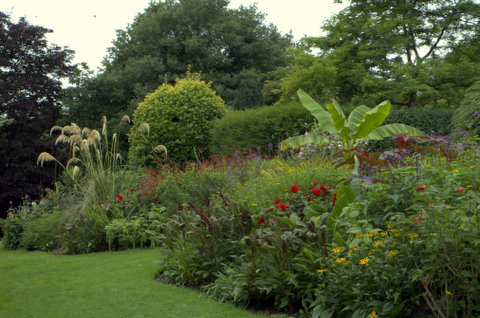 As the topography evens out wide swathes of lawn lead the eye, and the foot, upwards through more seasonal planting on the hillside, schemes of pink and white Cleome hassleriana, white Nicotiana sylvestris, vibrant blue Cernithe major var. purpurascens and the striking pinks of Cosmos bipinnatus, frothy annuals bursting they glorious bounty for a few shorts months in front of heavily hipped shrub and rambler roses and interplanted with perennial fuschia and grasses. Beyond these are the riotous colours of the herbaceous borders. Dotted through the more familiar flowering British perennials, white mop head hydrangeas, sunny yellow Hemerocallis, brilliant coloured Salvias and Persicarias 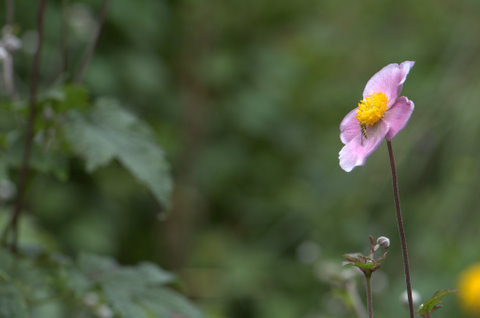 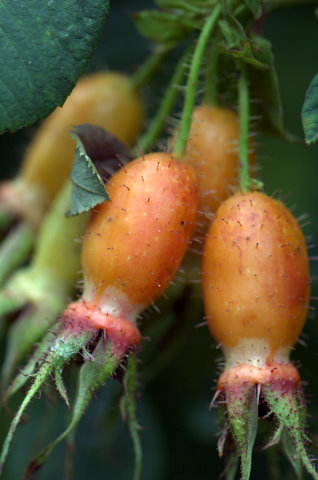 According to the scant literature this sections recent past was that of farmers field with sand for soil, the remnants of the quarry waste. Making it’s transformation since 1958 is all the more remarkable.

Skirting the small but functional salad and herb garden to the side of the cafe and plant centre takes me up into the very top of the quarry garden and ducking through a clipped Ilex into the tree canopy of the quarry gardens bursting with giant shrubs and trees. The path falls away, steeply in places, to the bottom of the old quarry but the lush foliage of the canopy is captivating and exciting. 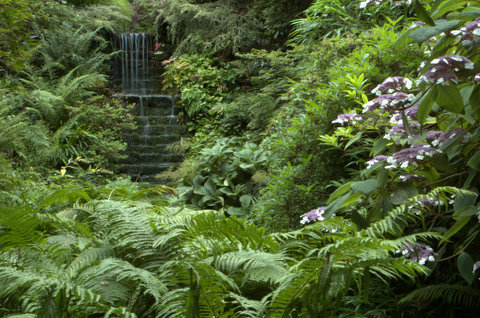 It is not often one can stand in the tree canopy and truly admire it’s layering and complex forms. Seeing huge mature specimens set in their own space is not something many gardens have space for. It delights the inner child in me, the one that longs to climb the tree and survey my surroundings. I resist the urge, and instead walk towards the sound of falling water off to my left. The woodland quarry was abandoned 50 years ago and following a planting of timber oaks for the local village the soil matter has developed from the accumulation of leaf litter, into well drained acid soils. Taking advantage of this the creator of the garden Colonel Harry Clive enlisted the help of friend and former director of RHS Wisley, Frank Knight and embarked on selecting Rhododendrons and Azaleas that would thrive in these conditions. Eventually some 250  species and cultivars have been collected and are currently on display though it is clear that today they are suffering from the effects of a recent outbreaks of Phytopthera ramorum , and have closed of two sections of the quarry to deal with the containment and eradication of the disease through careful removal of affected plant matter and implementation of the strict DEFRA codes of hygiene. Though Cornwall and the south west have been hardest hit by the spread of this disease which has led to thousands of outbreaks in the last 8 years it is sobering to see this devastated section of the garden and a strong reminder of the fragility of such gardens. I am careful to observe the instructions and keep to the path, all thoughts of tree climbing are now firmly parked in the ‘not appropriate’ box.

Locating the sound of falling water I am presented with the sight of layers of stone embedded in the hillside cascades of water tumbling over it in a rhythmic stream. The water fall is man made and installed to mark the 50th anniversary of the garden in 1990. A pump stimulates the flow and once again invites curiosity as to why there is an irregular flow to the water. From the base one is looking up into the steep side of the quarry that is now matted with lush planting. Thick with damp ferns and hostas, backed by towering Rhododendrons and vast Hydrangea macrophylla bushes. Above the fall is a small feeder stream with a rather incongruous but imposing bronze stag sculpture sits surveying the garden from above.

The woodland floor is no less alive and supports a mass of Dicentra, Epimedium and wood Anemones as well as ivy leaved cyclamen and mats of glossy dark Hedera. The season of interest in this woodland quarry is a long one beginning with early Rhododendrons and Magnolia in spring, followed by Azaleas, Rodgersia podophylla and tree like Hydrangea macrophylla, then as autumn draws in, the promise of colour comes from a number of fine Acer palmatum specimens.

To be within the quarry is to be transported to a deeply shaded woodland environment, surrounded by the sounds of the trees, the waterfall and living inhabitants. It has rained on and off during the day and the damp smells of forest are really quite delicious when deeply inhaled on this walk.

Again a steep rise out of the quarry leads to more wide open avenues, heavily planted on either side with rich blue and deep pink shrub Hyndrangea. On this side of the 4 acre garden there are mere glimpses of the surrounding countryside, it focus seems more towards the views created within the garden and to showing off the natural and man made topography within it’s boundaries. Dipping away to the back of the quarry lies the gravel garden, terraced, hedged and inviting further exploration. It’s purported to have strong architectural and textural plantings with many non-natives from New Zealand on display. My first sight over the terraced raised beds is of  a long metal pergola carrying thick stems of Laburnum, Wisteria and roses, reminiscent of those iconic, well photographed walkways at Barnsley House and Bodnant .

The Gravel garden, formerly the Secret garden, is less pleasing than some of the other sections and although packed with unusual plants and interesting, diversionary routes through it, I find I do not want to linger. Perhaps were there hot sunshine it might transform the space but given the slightly damp, overcast morning I head downwards back towards the hillside gardens.

Finding a quiet bench overlooking a long sweep of lawns and shrubbery I read that the Dorothy Clive Garden and the Willoughbridge Trust that maintains it, was created by Colonel Harry Clive in 1958. The actual gardens were created by Colonel Clive for his wife, Dorothy, who was suffering from Parkinson’s disease and works began in the quarry in 1940 and continued until 1958 when further stretches of farmland were acquired and plans developed for the expansion of the gardens. Colonel Clive oversaw the projects as curator until his death in 1963. The original purpose of the garden, as a haven for his wife to exercise during her illness, has remained a key objective for the Trust and it continues to offer visitors space to enjoy rest and relaxation among the many distinctly divided areas of the garden.

Stretching over 12 acres the garden has been cared for and developed by many people, staff and volunteer, though clearly the head gardener of 35 years, George Lovatt and the curator Paul McCauley have influenced it greatly during their periods of stewardship. The two main gardens, the quarry and the hillside are broken down into smaller sections that flow easily back and forth via gravel paths and interesting walkways. And although the flow is quite clearly defined through wide paths and open lawns, the temptation to wander off on a narrow path in search of a plant one can see in the distance is just too much for a greedy plants person.

If I had one criticism it would be, as ever, the lack of consistent good plant labeling, I know and understand the frustrations and challenges faced by hosts of public and private gardens open to the public that, as the late Christopher Lloyd of Great Dixter stated in his leaflet,

…Here are some of my reasons for not labeling:

Christopher Lloyd and Charles Hind: A Guide to Great Dixter. 2008

So I find I am recovering old ground during my visit coming upon areas from different angles and gaining yet another insight into the planting and the design of this lovely private garden. I want to spend more than the hurried morning I have planned here but Wollerton Old Hall is equally demanding of my attention so I make a mental note to offer pet sitting services next spring when the quarry garden will be at it’s very best and to make a day of it, brining not only camera but also note book and pen to record as much as I can about this enchanting garden.