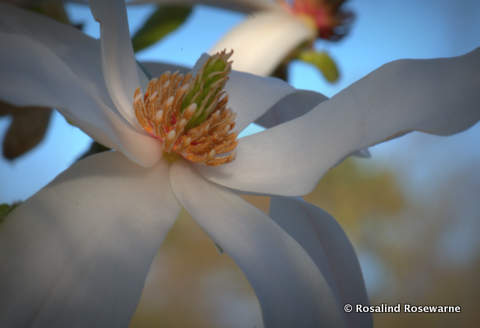 A remarkably ancient plants species fossil records indicate that the Magnoliacea family might be as much as 100 million years old. Unsurprisingly the plants are often beetle pollinated in their native homelands, Asia and the America’s.

Introduced to Europe before the mid 1800’s the family was named named by Linnaeus after the re known French botanist Pierre Magnol.  In Europe, where beetles are less frequent, and wind and flying insects more prevalent at flowering time they are also pollinated by flying insects and pollen carried by the wind.

Their evolutionary needs demanded volumes of pollen for beetles to be attracted to them (beetles eat pollen) thus Magnolia carry a great deal of pollen but no nectar and only a slight scent in the flower. Their are over 200 species though most fall into the white or pink range there are some that produce rare yellow flowers.

In Europe it flowers in early Spring, around March time, each flower emerging on bare branches, cup shaped and comparatively large. They furry bud cracks open to reveal the silky satin textured waxy flower which can take another few days to fully open. Large trees in good seasons are smothered in blooms heralding the beginnings of the flowering season. Even though it is a low key plant for 3/4 of the year to see one in full bloom on a bright spring morning is breathtaking. 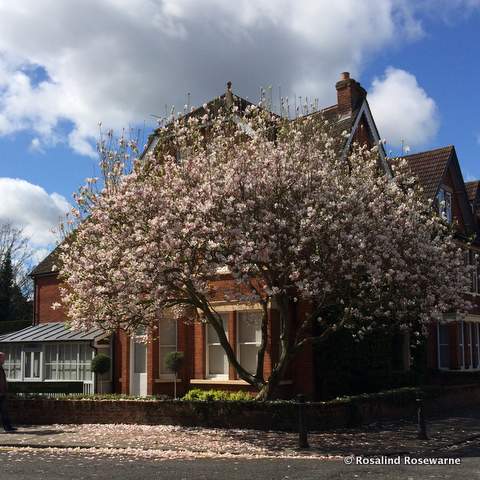 Like many other plants Magnolia’s have been bred for many years to develop various features, flower size and colour, tree size and shape even timing of flowering has been worked on. In fact flowering time has been a crucial feature of the development of the ‘yellow’ magnolias. Since the 1950′ breeders have been making crosses with the later, yellow flowering M.denudata in the hope of getting a good yellow to flower before the leave show, giving the spectacular look of the M.cambellii, M.mollicomata, M.saregentiana robusta types which flower early in the year. Thse bred in the 1950’s made way for the first reall yellows in the 1990’s and followed by the plethora of good early flowering yellows in the naughties. Caerhays recommend M.’Daphne’ and M.’Sundance’ as good options.  I have still to see a yellow in flower but this year plan a trip to the south to see some of the Magnolia collections.

Magnolia stellata which is more bush thn tree but can get to tree dimensions with time. Delicate star like flowers in abundance early in the year, rich wide green leaves follow on pleasingly spread branching.

Magnolia Susan a really blousey bomb of a tree, quite large and huge rich pink flowers (ok not as huge as M. grandiflora but pretty huge). Not for the small of space but in a moderate sized garden a wonderful specimen tree.

You can see some wonderful collections (in the UK) at The Caerhays Estate, Wentworth Castle, The Savill for the Crown Estates and Bodnant Gardens for the National Trust