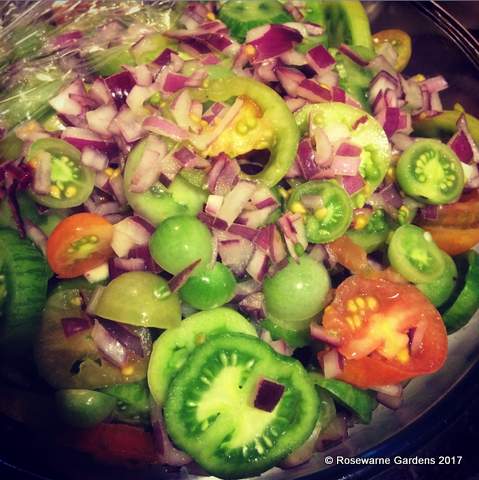 You know the old saying ‘when life gives you lemons….make lemonade‘ well when nature hands you a series of Mill’s periods* resulting in a surge of tomato blight you make a plethora of Green tomato chutney. 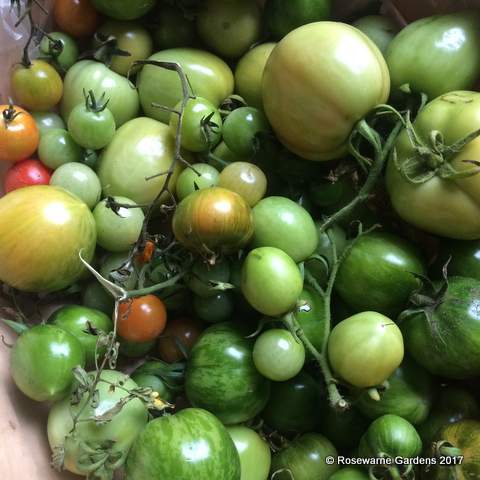 2.5kg green tomatoes (if a few red/orange ones go in so much the better)

Method: Slice up the tomatoes fairly thin, finely chop onions place together into a bowl and sprinkle with salt. I turn this over once or twice to mix it all up, then cover and leave overnight (for at least 12 hours).

Place vinegar and sugar into a large sauce pan (mine’s a 26ltr stainless steel pot) and heat gently until sugar dissolves then bring to the boil. While this mix is coming to the boil chop the sultanas roughly, using a large knife. Peel and core the apple, roughly chopping into chunks. Place apples and sultana’s into the vinegar mix.

Drain the salted tomatoes and onions, don’t rinse, and add to the vinegar mix. Bring to the boil, lid on and once boiling turn down to a low simmer, lid half off, for about 60 mins stirring occasionally so it doesn’t catch on the bottom of the pan. You don’t want burnt chutney bits ruining your flavour. I check mine every 15 mins and it’s on at a barely bubbling simmer, it takes about 90 mins for me with the lid off.

This makes about 8-10lb’s of chutney for me but I use up every random bottle and jar I have so it’s a bit hit and miss on exact quantites. While the chutney is reducing hot wash the jars and lids and dry off in a low oven for 10 mins. I leave my jars in the turned off oven until it’s time to bottle to keep them hot.

Once the bubbling mixture gets to a thick pulpy consistency it’s ready to bottle. Take your jars out of the oven and ladle the lovely gloopy chutney into your jars. I use a jam funnel to reduce mess, well in theory that’s it’s job! 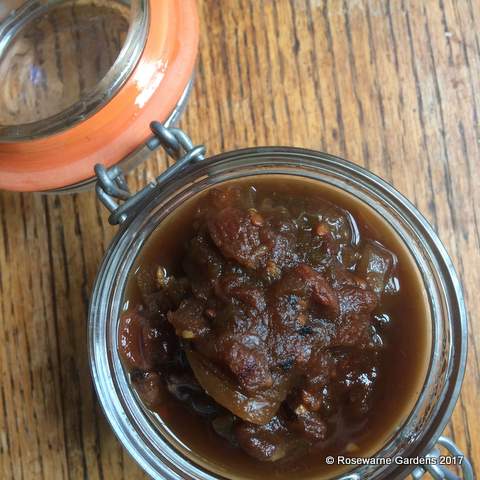 Lids on and screw tightly shut, leave to cool before labelling. Store in a dry dark place (cupboard) and they should be ready, at the earliest, in 3 months. Personally I never eat chutnies for at least 6 months as the flavour develops. Once opened though it has to be stored in the fridge and lasts about a month, if you’re lucky. Ours usually lasts a week if we’re lucky!

*A Mills Period is when ‘environmental conditions are favourable to promoting the development of a vector (spores in the air or soil and insect populations) or disease’ – i.e. when the weather is both warm and damp.