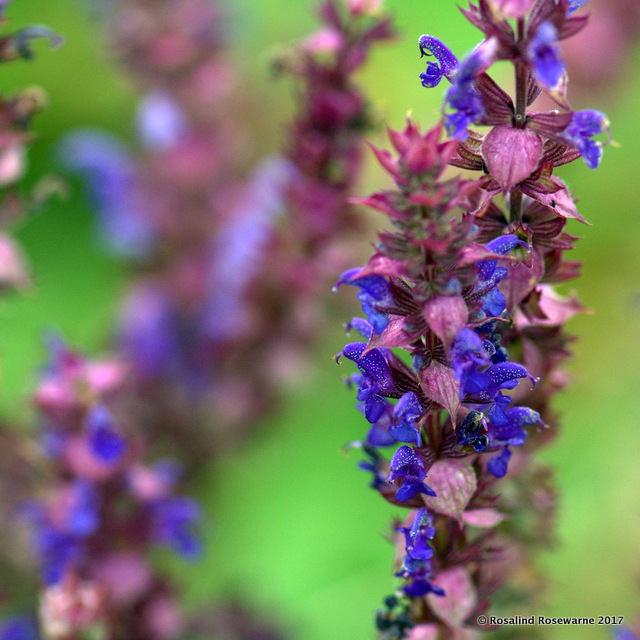 I wouldn’t have said I was an enthusiast before I started writing this but it turns out I am rather fond of the Salvia family. Oddly I don’t much like the common or garden sage grown by many to eat, too perfumed for me, although I suspect I wouldn’t fault it in a bit of sausage stuffing! It IS however a useful addition to a herb garden mainly due to it’s robust bulk and general well behaved-ness. A well drained hot sunny spot is obviously a favourite position but I have Salvia officinalis Purpurea (Purple Sage) growing like a rampant weed on a wet clay loam beside a path, a very hot, wind blown location which likely helps it. No molly coddling for this plant.

My mother grew a variety of lush foliaged, delicately flowered and elegant ornamental Salvia’s but all were soundly wrapped and tenderly cared for in the heated greenhouse through winter. They perished on our cold wet clay the first winter after she died. None of us were horticulturally minded enough to know they should come in.

The next time Salvia really spoke to me was a decade or so later at Chelsea, year after year there it was, Salvia nemorosa Caradonna, or sometimes S.Oestfriesland, showing off in a jewel rich purple haze on almost every garden. Great tall spires smothered in greedy insect-ery – bees and the like. Living with a variety of shady London gardens at that time – read clay, clay and more clay –  it never thrived for me.

In my first serious garden visit forays for college an abundance of them seemed to be being used, from smaller shrubby herb borders to grandiose semi-shrubs holding the centre and back of lush herbaceous borders. The livid blues cannot help but catch the eye,  S.patens ‘Cambridge Blue’  and of S.guaranitica ‘Black and Blue’ spring to mind but of course there are many. Salvia are part of the mint family, (Lamiaceae, Tribe Mentheae) so really part of a truly enormous plant Genus. Unsurprisingly varieties comes from a number of places and bring regional diversity along with their respective heritage. The widest diversity is found in Central and South America (approx 500 species); Central Asia and the Mediterranean (approx 250 species); Eastern Asia (approx 90 species).

So enamored of them I bought a rather pricey S.elegans (Pineapple sage) only for it to cark it after one rather damp winter – no greenhouse. I am resigned to the S.nemorosa which I appear to be able to grow quite well along with one delightful delicate pink flowered, unknown variety given to me by a friends, green fingered, green-housed up sister. It lives in a pot and is brought inside in winter!

The last of my small selection is a very recent favourite, a cut flower, S.sclarea or Clary sage coming in lilacs, pinks and a green/greyish white. I seem to be very greenfingered with this having struggled to kill it when it grew in the wrong spot. Hurrah, finally a sage that truly loves my plot!

Try a sage for yourself, see what you can master. Collections can be found at Ashwood, Kingston Maurward Gardens Dyson salvias at Great Comp plus of course lots and lots of other places!